Learn the history and experiences of the indigenous people of the Northeast in this Algonkian Living History lecture. This lecture and demonstration is led by Drew Shuptar-Ravis and covers history from 1650-1690.

Learn about the relationships the Algonkian people had with others in their respective regions/colonies. Enrich your knowledge about the adaptation of Native American life to European settlement and trade goods, including the importance and use of wampum through this critical period.

The lecture will also help to understand the magnitude of the earliest American culture clashes between Natives, Europeans and Africans. Participate in the discussion on early colonial conflicts, including the Peach War, Keift’s War, King Phillip’s War and King William’s War. 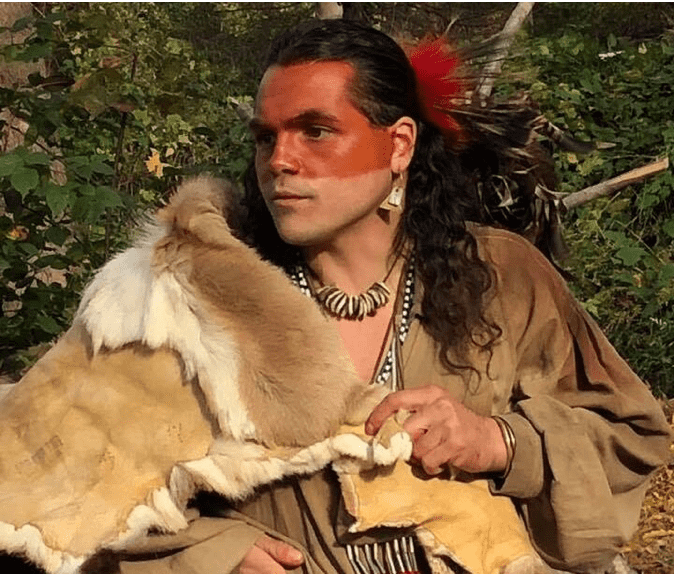 An Algonkian Living History lecture and demonstration detailing the experience of indigenous people in the Northeast from 1650-1690 with Drew Shuptar-Rayvis.

Explore the interconnected relationships between the Dutch, Swedes, English and Algonkian peoples in their respective regions/colonies. Track the adaptation of Native American life to European settlement and trade goods, including the importance and use of wampum through this critical period along the Atlantic and mid-Atlantic regions (southwestern CT to MD). Understand the magnitude of the earliest American culture clashes through customs of war, adoption, captivity, alliance, friendships and marriages between Natives, Europeans and Africans. Contrast the discrepancies in the concepts of land ownership and usage. Discuss the overshadowed early colonial conflicts, including the Peach War, Keift’s War, King Phillip’s War and King William’s War.

Drew Shuptar-Rayvis (Pekatawas MakataweU “Black Corn”) holds a cum laude Bachelor of Arts in Anthropology and Sociology from Western Connecticut State University and a Certificate Degree in Archaeology from Norwalk Community College. A true American of the mid-Atlantic region, his family includes indigenous Accomac and Pocomoke heritage, Pennsylvania Dutch, Welsh, Swiss, English, Scots-Irish, Boyko Ukrainian and Ashkanazi Jewish, he honors all of his ancestors as a practicing living historian and regularly participates in colonial era reenactments, interpretations and public educational events. He has studied and become proficient in the reading of Wampum and works diligently in the research and preservation of the Eastern Woodland languages, particularly Renape and Mahican and is educated in the many European languages at use in the Colonial Period. He was the first garden manager of Western Connecticut State University’s Permaculture Garden, and practices Native horticulture.